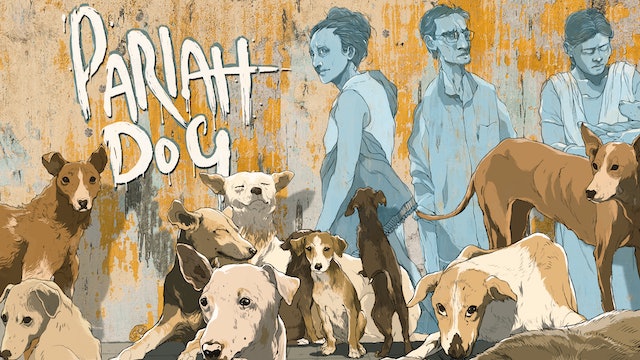 India has the highest number of street dogs of any country on Earth. With rapid development, an intense conversation about the future of these dogs is currently taking place. Can a modern India exist with free-roaming dogs throughout its major cities? Pariah Dog is a creative documentary focusing on several eccentric individuals who care for and love these dogs in Kolkata, the former colonial capital.

Shot over three years, the film paints a kaleidoscopic picture of the city of Kolkata, seen through the prism of four outsiders and the dogs they love. The Indian Pariah dog is one of the oldest breeds of dogs in the world, almost untouched by human breeding, now struggling to survive in India’s massively populated cities.

The human characters in PARIAH DOG find themselves in a similar predicament, out of place and time in a world they find uncaring and harsh. Their answer is to show compassion and love to creatures who are suffering. But this alone is not always enough to sustain them, either materially or emotionally.

"The way Pariah Dog captures Kolkata, with its surreal scenes of everyday urban existence and sensuous shots of the city at night, reveal the curious eye of an outsider who has old ties to the place.” Film Companion http://ow.ly/RiGm50EBds3

DIRECTOR STATEMENT:
"My original intention with PARIAH DOG was to craft a portrait of the city of Kolkata, seen through the eyes of its numerous street dogs. But as the filming progressed, I became increasingly interested in a few characters who feed and care for them, quickly realising that these street-level caretakers’ lives often mirrored the dogs in their outsider status and deep loneliness. It was difficult to gain the trust and access needed for the kind of intimate, private
moments I was looking for, which was only made possible by the three-year shoot, and the help and support of my local collaborators. The film intentionally leaves out context and backstory, focusing instead on an immersive experience, with a lightly-sketched narrative. I’ve found in discussions of the film that, while some questions in PARIAH DOG go unanswered, the meaning of the film comes through."